Words cannot convey my joy at Bravo’s decision to re-air Season One of Vanderpump Rules, just as we fans must settle in for the long winter’s night between the current reunion and future new episodes. So let’s get in our Deloreans and return to 2011!

VPR’s trademark musical brand of intense & catchy plays over shots of SURvers doing their thing, and right off the bat I’ll defend my guilty-not-guilty pleasure by saying that it really is always fun, after 20 years in the service industry, to watch other people do it on TV. One reason I can never quite quit restaurants literally or figuratively is that they’re automatic entertainment, even/especially during the hardest of shifts.

First-ever credits! Stassi and Scheana waitress as rival Queen Bees! Jax and Sandoval still get along and bartend! Kristen and Katie are the taller brunette ladies-in-waiting…or are THEY really the Queen Bees? We’ll all find out soon enough, as Lisa storms the gates and lets us know that shit’s about to get real.

Jax grabs a martini glass by the lip instead of the stem, then gives an “oops” look because of the cameras — quite the far cry from (SPOILER) nowadays when he flat-out tells people “That drink is too hard to make.”

Stassi explains to the audience that everyone who works at SUR is a model or musician or something, and they all have lofty goals.

Kristen apologizes for being so good looking.

Stassi thinks Scheana is a “man-stealing whore,” and they flash back to “Real Housewives” when Brandi and Scheana interacted. Then they bicker about who’s the actual waitress of the table ordering some delicious-looking strawberrytinis.

Stassi went to an all-girls school in New Orleans, and has a heatedly passionate relationship with Jax.

Foreshadowing to the famous S3 exchange, as Stassi tells bartending Jax who’s chilling with Scheana that she needs a pinot grigio! Then she shoos Scheana away and she and Jax fight about her. Stassi says “actually” 70 times, but not “literally” even once, which is like this show’s trademark word. 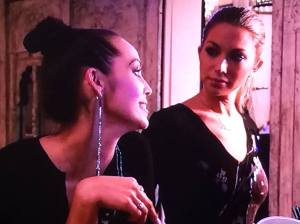 Katie tells us that she wants to own a record label, as a phoenix rises from her bosom.

Sandoval’s band is going to headline the Viper Room! Yay!

Lisa calls the OG crew cliquey, as she holds a meeting regarding the problem of not everyone’s pulling his or her weight; i.e., Stassi. She says that Stassi doesn’t know the wines well. Stassi smirks that they should have a wine tasting, and there is an example of how and why I can’t not love Stassi. To (SPOILER) quote Jax, “She is funny.”

Then it turns into Stassi versus Scheana, as they debate the merits of tip sharing. They do it at SUR but not Villa Blanca. I’ve done it both ways, and see the merits and disadvantages of both. Whatever I’m told to do in that regard, I’m fine with. But as much as I don’t like how mean everyone’s being to Scheana, I do agree with Stassi’s overall point that it’s not cool to come into a new restaurant and start dissing how they do things, compared to your other job.

Peter and Jax chill at a different, more casual bar and commiserate over how awful Stassi is to date. Then I can’t quite tell what is going on as Jax and Peter kind of flirt with the waitress in a very “Ross with the pizza girl who was on ‘Dexter'” kind of way, and she makes an escape.

Scheana and Shay, the latter of whom doesn’t even get a name caption, go to the recording studio and I will say just these things atm:

But still when all is said and done, the recording history behind Scheana’s “Can You Freak, Bitch?” is far less creepy than that behind GNR’s “Rocket Queen,” so let’s move on…

…to Kristen, Stassi, and Katie chilling on the couch in Stassi’s and Jax’s apartment. Where there is apparently a Reese’s Pieces machine???? And some other one next to it, possibly Mike & Ike???? That rules.

Stassi rails again, some more, about Scheana, whom Kristen defends and Katie kindasorta does. It’s all enough to get Stassi to switch out “actually” for “really” in this current VPR drinking game scene. Yet still, no one is saying “literally” and it’s beginning to freak me out.

Jax said he’s off to work to do a BMW commercial (that’s awesome!), then tells us that Stassi’s last two boyfriends cheated on her 😦

“Lisa’s House,” not yet captioned as “Villa Rosa.” Her business partner Guillermo (one of my very favorite guy names!) comes by to eat sushi made by “Francis, Executive Chef.” Since the sushi place next door to SUR closed down, Lisa thinks they should incorporate some into SUR’s menu. Smart! But possibly even more amazing than Lisa’s business acumen is her version of Big Carl/Lou, et al. from “Cougar Town;” i.e., a glass that holds an entire bottle of wine!

First sighting of Sandoval’s Flat Iron, that got him the name FI Tom on PreviouslyTV! At least I think that’s the etymology. He and Kristen get ready for work together, and Kristen makes fun of him for being a diva, and I can be this way too so am not trying to judge, but it is still hilarious to watch Sandoval stomp around and complain about only finding the wrong hairspray, because any time a spray says “touchable” it is the Absolute Worst. They finally get out of their place and trudge to work. Sometimes VPR has a scene like this where it’s pretty relatable, and old-school Kristen and Sandoval really do seem to legit like each other and laugh a lot.

Scheana and Tina go to an elixir place, where they discuss their shared passion for music and laugh a lot about how insanely dramatic SUR is, in another legit-charming scene. Except more confusion: Scheana has an audition for Pink Ranger — in what? Is this like Ron Livingston’s Goofy opportunity in “Swingers,” or did they do a”Power Rangers” reboot/movie of some nature (vaguely) recently?

The gray/blue SUR dress : Stassi as hoop earrings : Regina George. To punish Scheana for wearing it, Stassi orders her to polish all the glasses in the main room. Lisa’s like, “Nuh-uh. Stop letting them bully you.”

First sighting of the SUR Back Alley! As Scheana and Stassi hash it out whilst wearing awesome boots.

Scheana won’t be Stassi’s little bitch, but Stassi’s not trying to hear it and says even if Scheana didn’t know Eddie Cibrian was married at first, she had to have known at some point in the ensuing two years.

Scheana cries and said that Eddie broke her heart, but she is now happy with Shay, and toats not trying to steal Jax. Then she ostensibly returns to work, where her and Stassi’s tables must be wondering where their servers are.

SUR again, but at night! Yay, Schwartz is drinking a beer with Jax at the bar while Sandoval bartends. The girls join them, and anyone worried that Schwartz’s “Bubba” tattoo was a fanwank should rest easy, because it’s the first thing we see him call her.

They all sit around and discuss Scheana over drinks. Sandoval sticks up for Scheana, and it’s sweet. Stassi continues to try to be bossy about it, but they all start openly mocking her and she laughs. 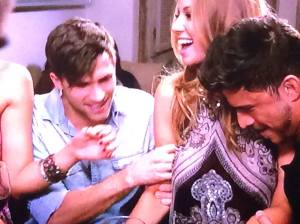 Next day or thereabouts, the gang meets for brunch at a place called Tart. Stassi orders both mimosas and sauvignon blancs, says “Boo-ya,” and openly fights with Jax at the table. Kristen confessionals that Stassi and Jax “both live in terms of never and forever,” which is pretty deep.

“This season, on Vanderpump Rules“:

So this is not, truly