Lisa, Katie, Scheana, and Kristina shop at Ixia. Lisa laments being too old for a certain dress even though she always looks stunning, tells Scheana in a polka-dotted red dress that she looks like Minnie Mouse, and then scolds Scheana and Katie for being Mean Girls to Lala. So they tattle to Lisa that Lala’s not really going to Italy for a modeling job and Lisa is like, well you still need to act better.

SUR. Ariana, Sandoval, Jax, and someone named Anthony are butthurt that they have to learn Pump drink recipes from Eric. Jax is flat-out insubordinate, so Ken awesomely gets in his face, and Lisa VOs about Ken’s being a bigger cock than Jax. Eric mentions that Jennifer Lawrence loves the Pumptini, which sounds delicious: muddled raspberry, lime juice, simple syrup, and vodka. 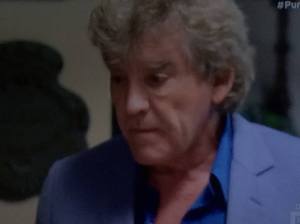 Lisa confronts Lala about her Italy modeling job lie and Lala is contrite, but adds that she didn’t go to Italy anyway, because she had a breakdown and needed her mama since people at SUR are being mean to her. And in that moment, I officially know that I love Lala. Lisa confessionals that when the SURvers pack up, it has the opposite of the intended effect, as it makes Lisa support the underdog ❤

Katie finds Scheana crying in the bathroom ☹ I knew about this from the previews but it still breaks my heart to see Scheana suffering alone in her marriage. I truly hope they can work things out.

Commercials and omg, “The Night Before Vanderpump Rules” looks glorious on all sorts of levels!

Apparently, Lisa has a swan who’s not feeling well. I love her love for animals, and hope Hankie is feeling better! 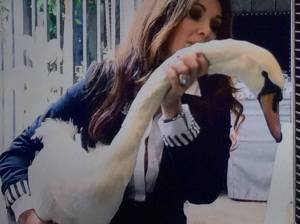 SURver/hostess meeting. The old-school servers aren’t happy that Richardson from Villa Blanca is there to give them a “You’re supposed to be friendly when you wait tables” pep talk. Richardson offers to make Katie’s babies. God bless restaurants.

Schwartz shows up to a store named Rubber Ducky for a modeling shoot with two women as that not-Taylor-Swift’s-“You Belong with Me” Vanderpump background music plays and Schwartz confessionals that modeling is the best job because he works with beautiful women. But then he basically is like, “Though I luv Katie 4eva,” and proceeds to use the word “clutch” as an adjective, then wildly mix metaphors to an impressive degree.

James and Kristen sit next to a pool. He goes from assuring Kristen her he loves her and only has sex with her, to telling the camera that he had great sex with Jenna, but loves Kristen, and in the spirit of this show, I literally can’t even, so let’s move on…

…to Lisa talking further to Scheana and Katie about expecting better from them than the Regina George/Gretchen Weiner act. She’s caught off guard when she realizes that Scheana’s personal issues go way beyond normal Vanderpump drama. Scheana does say she’ll apologize and make it right, which is something I truly admire about Scheana – she’s a confident diva, but totally humble when the occasion calls for it

Tom & Ariana’s apartment. A two-second nod is given to Sandoval’s music until once again, the Kristen/Jax Couch of Foot Sex comes into play, this time as they bring it downstairs to give to Faith. They carry the couch while she sits on it which is actually kind of impressive, then urge her to steam clean it, ‘cause, “dried semen.”

Unfortunately(?), no one yelled, “PIVOT!”

Lala joins Jax in the back alley and compares SUR’s lady politics to dodgeball. Jax calls the girls bullies and says they run people off. Lala confessionals that she’s a girls’ girl and would rather hang out with them, but the girls are giving her no choice but to befriend the dudes. Jax does that thing where he acts all cagey about the girl he’s currently banging to the girl he wants to bang in the future. Lala says she’s been single for three years and is hung up on her ex.

Scheana & Shay’s place. Aw, cute kitties on the bed. Ariana shows up and Scheana spills her heart, saying that she and Shay have issues and she’s become jaded to the idea of marriage. She breaks down, and clearly feels helpless and scared that she can’t make Shay happy, who is instead self medicating, turning to drinking and away from Scheana.

Ariana confessionals that she hasn’t heard all of this, because she hasn’t seen as much of Scheana lately, due to drawing boundaries over the Kristen issue. It worries her that Scheana puts on a happy face when she’s not, but Scheana cries that she doesn’t want to burden others, and that she’s so lonely in her place, surrounded by all her wedding pictures, even if she does have a super-pretty pink headboard. The last part is my own editorial; I’m enamored with it:

But I feel incredibly bad for Scheana, and just want to scoop her up and take her out for ice cream. Or Fireball. Or both! She awesomely pulls off her fake eyelashes in a very humanizing bit of offhand frustration, while questioning whether she jumped into things, and what she should do now. God, I feel so much empathy for her here! This isn’t the most snarkworthy episode ever, that’s for sure.

SUR. Lisa innocently asks James how he is, so he lets her know that he and Kristen are in a “bad patch,” which I’m just going to go ahead and assume is a euphemism. She’s basically like “Will you break up with her already,” and seriously. I don’t blame James for being upset after experiencing/watching the Sandoval Obsession and in Vanderpumpian terms 1,000% had his back last season, but cut it off, don’t cheat and then keep Kristen around. It’s not just mean; it’s unsanitary.

Schwartz and Scheana go to a jewelry designer for Katie’s engagement ring! Yay! Scheana shows the designer Katie’s demands for the ring, and I don’t understand half this list!

Sandoval makes awesome “Better you than me, man” face.

Oh and Scheana said she’s seen Schwartz in a Modelo commercial “like 17 times” this past week, and he can swing it! Wow that’s awesome, go Schwartz! And can I just hand it to Scheana again – this is obviously hard for her, but Schwartz would never know; she’s 100% there with enthusiasm for him and by extension, Katie.

Schwartz chugs his champagne in real time and confessionals that he’s ready. Awesome. I dig Schwartz and Katie and think those two crazy kids can make it work! Scheana discusses needing to update her wedding bands, which transitions to the Toms’ asking after Shay. Scheana admits to crying hysterically and isn’t as vulnerable as she was with Ariana earlier, but she’s also not pretending. She does change the subject though, clearly in order to keep things upbeat and about Schwartz and Katie. They cheers to its being “about [bleeping] time.”

SUR bar. Jax pulls a cork out of a bottle with his teeth. Scheana needs a Pump ‘n Glory, which Scheana accuses Jax of not knowing how to make. Jax is like Nuh-uh, then lists the ingredients and that drink sounds incredible TOO!

The beginnings of James & Lala, as James gives her a random hug and asks if she likes “fucking people’s boyfriends.” I mean, I guess as far as pickup lines go, it’s not the worst one I’ve heard on this show…James says he doesn’t cheat on his girlfriend (except for that one time), but he’ll be her friend, and not to sweat the girl drama. Lala confessionals that James isn’t her type, but there’s something about him — maybe the accent. I know these confessionals are edited out of chronological order and respect that right away in response to James’s *question*/pickup line, Lala was like, “No.”

Scheana is waitressing, but then sits down to talk to Lisa after closing out her last table. Peter brings Lisa tea, and that is all we see of Peter this evening 😦 Scheana lays it all out for Lisa, that problems started around Christmas – Shay’s drinking increased, and way worse, he’s mixing pills with alcohol. She says at the peak of it all, he was taking five Vicodins a day and still drinking, and Lisa looks understandably troubled. Scheana says she feels like she’s been cheated on, because it’s this whole other secret part of his life that he hid from her. “I just never saw myself here,” she says in conclusion and her disappointment is so palpable and I start to cry for her; only on a shallow note, I wish that when I cried I looked half as put together and non-blotchy as Scheana!

They flash back to Scheana and Shay at the wedding episode that I just rewatched whilst laid up with my sprained ankle, and it’s so sad. Scheana confessionals that she doesn’t know if they can get through this. I hope you can, guys ❤