Very late start today, due to to various factors including, but not limited to, arising later than I’d hoped. Around 5 am I woke up and couldn’t fall back asleep, but felt like a Final Girl as the sun rose and I’d resisted the temptation to have a black and white cookie. I’m not really even that into black and white cookies at all, but I like to have sweets when I wake up in the night. Probably I should have just stayed up then, but lessons learned. And while I want to keep striving to get up earlier, it felt almost if not more important that I recovered from my disappointment with myself, didn’t panic at the later hour or even the traffic jam, still bought the produce, and am now drinking my apple-ginger shot and writing. Even after subbing half the apple for spinach, it felt like it needed some color, so I added a carrot! 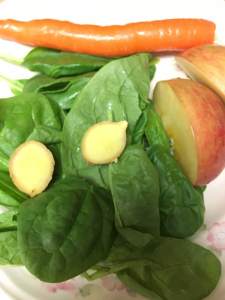 In an unprecedented turn of events, I remembered to drink water! 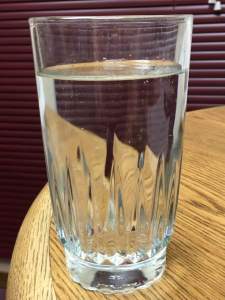 This doesn’t taste nearly as good as in the past. I think I’m really bad at peeling limes and squished out all the juice. The drink’s fine, just not delicious like last time. Maybe I’ll go ahead and blame the introduction of kale, as it seems to be a popular scapegoat.

Made more juice — Digestive Aid, with a few tweaks. I experienced fennel fail this morning — couldn’t find it anywhere at Safeway, and definitely not within the parameters of my self-imposed game of “Supermarket Sweep!” So I added mint and extra ginger, ’cause digestive. Also I was missing two carrots. But I’m drinking it and despite my low-energy afternoon, I’m starting to feel my body appreciating the discipline of sticking at least mostly to the time frame and ingredients.

The Rest of the Hours!

Went home and had the second Digestive Aid, but the two-pound bag of carrots in the fridge was a mocking reminder that I had a knockoff Digestive Aid, free of fennel and missing two carrots.

Naturally, I proceeded to be like “Oh yeah, carrots?” and juiced the entire bag, then shared with my family.

Filled with energy, I suggested to Josh that we go to the gym! This has not been like me these past couple of weeks, and it is never like me at 8-something pm once I’m cozy at home. He agreed, and I only did the elliptical for half an hour then sat in the sauna, but it felt incredible; I felt strong, and it was really positive reinforcement, especially since I thought I’d be down for the count until at least Day Four.

Then I came home and had my last juice, but according to MyFitnessPal, my protein was under even with extra powder, so I ate a hardboiled egg. I did feel better without seeds and didn’t want to mess with any, and hardboiled eggs aren’t exactly one of my triggers, so I bit the bullet, so to speak, to get some extra protein. All my other levels were reached, including calcium, which was a good one to see. And my sodium and fat were under, which isn’t what MyFitnessPal usually tells me 😀

However, after a REALLY good stomach day, it started hurting! So maybe I just need to not eat before bed in general, hard as it may be. But I’m not going to beat myself up over it, as I did consider my choice for like half an hour first.

Also in the interest of full disclosure, I did have a few (honestly, just a few!) pieces of fresh parm in the middle of the night. But those black and white cookies once again did not have their way with me!