Vanderpump Rules: S1, Ep6: Caught With Your Trousers Down

As I just started watching “Vanderpump Rules” this past season (three), there is a Lot To Learn, regarding backstory to which I simply don’t have current access. So while I’ve seen the three Season One eps that are preciously hoarded on my DVR, it’s been a couple of months at this point since I’ve watched this glorious show, and mostly know Season Three. Therefore, I’m anticipating quite the wild ride.

Katie in a really cute bob haircut totally lays it out for Stassi that someone (not sure who) just wanted to get in Stassi’s pants, and Stassi is like: 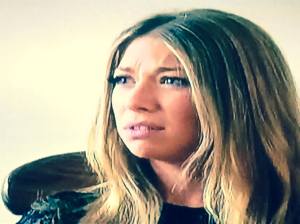 Stassi celebrates one of her notorious birthdays, and Katie says “Spare me” in a shoutout to my family. Glasses are clinked; limos are ridden; and Stassi makes out with a dude I don’t recognize. Damn, I’m going to miss her now that she’s (SPOILER) not on the show anymore.

Hahahah people are dressed in fancy outfits and throwing drinks at each other and I am literally LOLing at 9 am and man I have missed this show in the majorest of ways. And this is just the previouslies!  If I elaborate on all the Stassi drama alone, we’ll be here all week. Suffice it for now to say that there are tears, and Jax you’ll be happy to know is having the best sex he’s had in a long time with that girl Laura Leigh who went on to be in “We’re the Millers.” Oh sorry: SPOILER!

Credits! And I know this is an absolutely terrible picture on my part, but I can’t chance things, because: a) my phone is at 24% and I left the charger at my parents’ house; b) how much does Stassi look like Carmen Electra here? 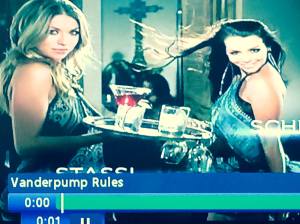 Jax and Tom bartend; Kristen and Katie waitress; and Lisa owns the room.

Kristen confessionals that Lisa wants all of them to pursue their dreams, and we see clips of SURvers running lines, Scheana singing, Tina modeling, Sandoval playing guitar with Lisa’s son Max, and Jax running into a glasses ad he’s in whilst in a glasses store. Peter produces a movie starring people from SUR.

Stassi is working on her fashion column for Lisa and Pandora’s website (Pandora as in Lisa’s daughter, not the music site), and some dude in flip-flops drinks a beer while having a conversation with Stassi and acting “Hey hey, sports fans!” to an extreme level that I did not know was possible. Then I guess someone cues him to suddenly switch from bitching about Stassi’s mess to feigning interest in her “blog,” as he calls it. She snipes back that “It’s not a blog,” and whatevs; self-loathing that term is so 2007. And NOW she is further testing my patience by saying people on blogs just upload whatever they write and “don’t even reread it!” While even proofreaders need proofreaders, Stassi if that were true, “whatevs” would have remained autocorrected as “wharves!”  Anyway. I do really like her dress, and we are at 505 words and four minutes in, so let’s keep moving…

…to Lisa’s house in Beverly Hills! “Melanie, SUR publicist,” Lisa, and Ken discuss having a happy hour until Ken drops the bomb that Jax and Laura Leigh were caught having sex on camera. Melanie says that as their publicist, she has to say that “It’s not a good look” and but wait, WHAT’S not a good look? This private conversation about something caught on cameras only they have access to? Whatever, Melanie.

Stassi and Scheana are eating from takeout boxes at SUR. Stassi is salivating, which she helpfully clarifies as being “at the mouth,” and she and Scheana are weirdly nice to each other. Kristen bitches about this and Stassi’s SURver negligence overall to Peter who is managing, and obviously not pleased to have to choose between listening to Kristen and reprimanding Stassi.

Takami, a sushi bar, where Jax and Laura Leigh fittingly have sex in the bathroom and we unfortunately are treated to *sounds.* Jax confessionals that he loves that Laura Leigh is a freak and they have a gross IRL conversation about not being able to keep their hands off of each other. Jax is down with her calling him attractive, but starts to get nervous as her crazy train starts veering off the rails and she all but proclaims her love for him.

Spinning class. Kristen confessionals that there’s a lot of pressure to be the hottest girl at SUR and they all work out five days a week. In real time, she and Katie discuss Stassi, and Katie says “between her and I.” Not sure what this particular drama is even about, but apparently Stassi is mad at both of them.

SUR. Laura Leigh and Jax contrivedly bartend together and Lisa needs to talk to both of them about their sex in the bathroom. Jax makes his patented “I’m innocent” face:

But the best part is watching Laura Leigh get all method actress and ask “What are you talking about?” while Lisa is like, “Please, children.” 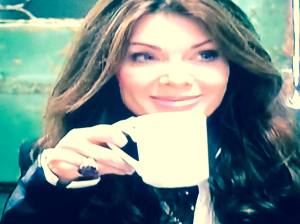 No wait! The best part is Laura Leigh indignantly responding, “We had sex at Takami!”   On a serious note, Lisa dismisses Laura Leigh and tells Jax that Laura Leigh is fragile, and she doesn’t want Jax messing with her heart.

Stassi’s apartement. Katie arrives with two bottles of white wine, and they talk it out. What “it” is, I’m not sure, but they cry and hug.

Ohhh, okay. Frank is Stassi’s preppy boyfriend, and is now pulling up to SUR in a convertible (natch) with Stassi. He’s getting fired on the same day she’s going to introduce him to her parents. Lisa is a total class act when she fires him, explaining that this is not the first incident, and then says she wants to hear his side of it. But he doesn’t play along and I don’t blame Lisa for her choice to call it a day with him. I think if he’d been polite and apologized, she’d have let him off with just a warning or a suspension at worst.

Stassi’s parents’ house. They drink vodka and find out that Frank’s now unemployed. They laugh at the story, and he goes on to complain that their daughter has “pretty girl syndrome” and asks him to do too much for her. Then Stassi’s parents make fun of Stassi for being homely in high school. Stassi says she got a chin implant and it changed her life, but they show pictures of her in high school, and she was NOT homely. Don’t get me wrong; I’m not anti-plastic-surgery if it makes someone feel better about him-/herself! And she is gorgeous now too. I’m just saying that I feel bad she thought that about herself, back then.

Kristen and Katie are on a double date with their Toms, which is weird to see since I’m used to Kristen pining for hers. They are at a place called Home, which I guess is some kind of outdoor diner/brunch/whatever place, because Schwartz gets a giant pancake that he calls “sexy,” but elsewhere on the table, there are sweet potato fries. Katie confessionals that it sucks that Jax and Stassi broke up, because now they can’t all hang out together anymore. That does suck.

Meanwhile, Kristen gets a call, then shares the news that Frank got fired and everyone is like 😮

Wait, actually I have no idea what’s going on with the food, because now Schwartz appears to be eating a giant burrito and I don’t see the pancake anywhere. Where is Nate the Great when you need him?

GORGEOUS sunset that makes me wish a little tiny bit that I lived in California.   Stassi’s apartment. She does her nails, and I think it’s interesting she does her own nails. She basically asks Frank what he’s going to do for work now. Frank amazingly says, “I made the decision to get fired.” Then they start talking about Stassi’s parents, and Frank essentially says Stassi and her mom are both bossy divas. They go back and forth and back and forth and omg can these two please break up already? Worst couple ever.

Back from commercial, Stassi is now crying outside. Then he goes to leave and she’s like, “Don’t walk away from me!” and calls him a dick and bipolar and an asshole. Then he says he’s questioning whether he should dump her or not. He drives away and Stassi smokes a cigarette and cries.