Things do not bode well for this ep, as it opens with Sandy auditioning for something that involves screaming. But I will try and keep an open mind, since Sandy’s been growing on me lately. It is made clear that this role is no more than that, and Sandy is very disappointed.

Allison and Billy’s. Allison is dressed like Sigfried and Roy and washing dishes when Billy walks in, shirtless (DRINK!). Turns out his paper went under, so he’s bummed out. He frantically looks for the idea for a story he wrote down on a cocktail napkin, but Allison had cleaned up earlier and thrown it out. Billy gets mad, but it’s not like she threw out a manuscript. Meanwhile, he finds it in the trash can and it looks smudged, but I’m sure he could garner the idea from what’s there. Instead, he stomps around and pouts as Allison leaves for work. He lets the answering machine pick up the ringing phone and looks alarmed to hear his mother reminding him about Palm Springs this weekend.

Jane and Michael’s bedroom. Michael tries to find room for the baby’s crib, but hurts his foot, and Jane takes him to the hospital, despite his protests.

D&D Advertising. Billy shows up to apologize with flowers to Allison, who is very busy. He invites her to Palm Springs for some contrived purpose. The scene ends very strangely, and we go to…

Shooters! Oh God, it’s Jake and Sandy. Sandy looks really nice. She’s toned down her hair color and makeup and it’s working. Rhonda comes in and Joey Tribbianis in reverse, telling Sandy there were no messages only YEAH there was; Sandy got the part! They hug and Jake looks sweetly happy for Sandy. 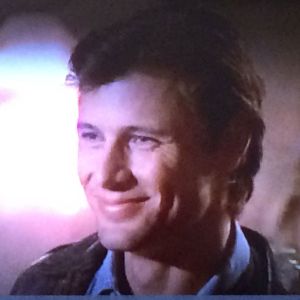 You know what’s even better than a regular Billy/Allison scene? An overdubbed Billy/Allison scene! Which we get as they drive in Billy’s car that looks like my childhood and they do their bicker-banter. Billy is wearing what I was going to joke are boxer shorts. Then I remembered that it was the early ‘90s, and boxers were my jam! (Though not jams.) My favorite episode of “Major Dad” was where Elizabeth led the Boxer Rebellion in school! However, I don’t even think guys really wore them as clothing back then, but I could be wrong.

Not sure what the postal service did to piss off Bldg. C (Billy’s parents’ place), but the latter is clearly winning this round of psychological warfare:

Allison is horrified that Billy’s sisters won’t be there. Why, I don’t know. It’s not like she’s met them. Allison freaking overreacts to everything and seriously needs to get laid or smoke some weed. Or probably eat more nutrients. Possibly all three.

Oh, and Billy’s told his parents that Allison is his girlfriend.

Rhonda and Sandy’s. Sandy can’t concentrate on her script because Rhonda is playing her music too loud. Rhonda agrees to turn it down and they talk about Sandy’s career. Sorry ladies, but that’s as much as I plan on recapping about this scene, because it’s really boring.

Billy’s parents’. There is intense comedy going on, because as we all now know, they think that Allison is Billy’s girlfriend! And Allison’s resting bitch face becomes active in a way that only Allison can achieve. She pulls Billy outside to chew Billy out. Billy btw has paired his boxer shorts with a pajama top. He can pull it off, but only because he’s a soccer player. Most people would look even more absurd. The scene ends super weirdly, as Allison says “I am really gonna kill you for this” while giving him a tight-lipped smile while the “Melrose Place” sex music kicks in and they stare at each other for 17 minutes.

Dinner. Need I mention the confusing nature of the food and beverage situation? Because it looks like Allison is pouring vodka into a wine glass for Allison, but I doubt it. There are also more sauces on the table than seems normal. They talk about talent and Billy’s family and PopTV looks more genius than ever for skipping straight to the end of this season when they started airing this last month. Yada yada, will Billy ever Make It As a Writer or should he become a salesman like his father? The ‘90s really made it seem like you had two career path options: follow your dream or sell something.

Rhonda/Sandy’s. Sandy is wearing a little black dress and even though it’s not even that skimpy, somehow looks like underwear. She is going to a Hollywood party with her casting director and is very excited!

The MP gang shows up to surprise Sandy with balloons and champagne for getting her big role. Sandy is thankful but says she has a date, which is not just a date but career related, yet for some reason Rhonda yells at her and everyone else judges Sandy with their eyes. It’s not like she knew they were coming! This episode is so weird.

Billy’s parents’. No. I can’t even with a scene about whether Billy’s a disappointment to his dad. Let’s move on.

Bedtime, and Billy’s shirtless! DRINK! He’s changed into different boxer shorts and Allison wanders in wearing one of those puffy and whimsical bathrobes everyone on TV in the ‘90s had. Allison doesn’t want to sleep in the same bed as Billy, ‘cause cooties! She then awesomely says that this is her worst nightmare; like if that’s the case, then count your blessings kid! Some people have nightmares worse than sleeping next to a hot guy.

GOD. Now they’re making us hear about Billy’s freaking dreams and self worth again. I’m going to go check my farm until this ends.

Never mind, we’re back at Melrose Place. Sandy comes home drunk and since it’s television, she just laughs and laughs even though the casting dude didn’t even bother walking her inside the complex so she is all by herself, just laughing away. Jake comes out and acts angry, then turned on. And since it’s been 30 seconds since we had a scene about whether one cast member believes in another cast member, Sandy says that Jake never did. Then he sexily invites her for a midnight swim, but she says “You had your chance, Jake. You had your chance.” She swings around on the banister to her apartment, but thankfully does not fall down and crack her head on the patio. Then she positively cackles as she goes upstairs.

Morning at Billy and Allison’s. Allison comes in to judge Billy (DRINK!), saying she didn’t know he owned a tie. I’m not sure that the best time to talk about another’s clothes is while wearing a blue denim shirt and maroon bellboy blazer, but that’s just me. He’s off to his sales job, and we get more fascinating talk about his crushed soul.

Cut to Billy’s job, where he tries to sell a couch to two of the most awesome under-fivers I’ve ever seen. That couple is serious about couch shopping. There’s another scene with Billy and his dad where they talk about chintz and Billy’s self worth, and where is the show about hot people in bikinis?

Jane comes home to Michael cooking her dinner. He says he is making “veggies and LAY-gumes.” He is on crutches, but as he takes the pot from the stove, his crutch falls away, the pot falls, and the towel in his hands catches on fire! Which is officially the most interesting thing to happen in this episode so far. Jane sprays him with the sink hose and goes to pick up two quarter pounders.

Melrose Place. Billy comes home all mopey, so it seems we’re in for a real treat. Allison hands him mail from Ed McMahon, rest in peace. And that is seriously the whole scene.

Morning at Sandy and Rhonda’s. Sandy looks beautiful in pale blue. She calls Rhonda out on being bitchy, about time. Sandy’s not acting like a diva at all IMO. And I agree with her when she says people are being selfish, because no one begrudges their successes, and she works really hard. Sandy makes one last plea for Rhonda to be her friend, then says she’s going to move out, and Rhonda tells her to break a leg in a mean way. I like Rhonda, but I’m 100% on Sandy’s side here.

Sandy’s movie. She looks pleased with the take they just did and is dressed like porno Mary Ann from “Gilligan’s Island.” The director is MAD creepy, and she says she wants to do another take, only this time the killer should slowly rip open Sandy’s blouse with a knife, one button at a time. I don’t even know what I would do in Sandy’s position. Shit like that really pisses me off. Enough women are willing to do enough things that you shouldn’t be sneaking things like sexual violence into scenes without the actor’s permission. Sandy says pretty much this, and does a really good job looking upset and gobsmacked. The director says if she doesn’t want to do it, she’ll replace her. So Sandy does it, and she’s not even wearing a bra! That makes the whole thing even more messed up.

Morning. Sandy is packing her things and acts like everything is fine to Rhonda, who looks concerned.

Billy’s trying to sell a couch to Seinfeld’s mom! They get into a fight about discounts. Billy’s dad tells him to apologize to her, and he refuses.

Sandy starts to leave Melrose Place, but Jake demands to know what is wrong. She tells him what we saw, but then reveals (so to speak) that she couldn’t go through with it.

D&D. Billy shows up to pester Allison at work, and makes a creepy comment about “nubile” teenage girls, then leaves. I’m not even kidding.

Nighttime at Melrose Place. Michael sits on the couch and says he only wants a “smidgen” of Jane’s pasta. He gazes at his navel and talks about trust and parenthood. WHAT SHOW AM I WATCHING ANYWAY!

Rhonda and still-Sandy’s, as she and Rhonda make up and eat leftover birthday cake.

Billy shows up at his dad’s store, and actually says, “My life is not about furniture. I know that in my heart.”  When he finally leaves and gets back to Melrose Place, he has another boring conversation, this time with Allison. He tells her she’s coming with him and his family on their houseboat. The scene goes on far too long, but then we are blessedly at