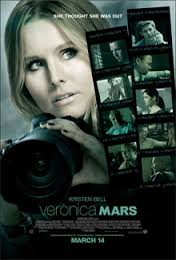 Stepping into the movie theater for the “Veronica Mars” movie last night reminded me of going to Nassau Coliseum back in the day. Nothing added fuel to anticipation fire like stepping into a stadium full of people sharing the same excitement.

While the AMC movie theater was certainly smaller than Nassau Coliseum, it was impressive in its own right, especially as my friends, Josh, and I realized that holy cow, we might not even be able to sit with our significant others, much less as a group. The theater was that packed. In the end, we sat in the very front row, so as to stay together, and besides, if you have to sit REALLY close, may as well just go for it and not have anyone in front of you!

As we settled in, I looked around and tried to process the enormity of the experience. We were there thanks to Anne, who’d been on top of the whole shebang from the get-go. While I’d known that the Kickstarter movie had already broken records and was a very fan-friendly endeavor, it was still amazing to see so many people in “Veronica Mars” shirts, and super fun to receive t-shirts and lanyards as we walked in. Whether the people handing them out were fans themselves I don’t know, but they seemed like they were having fun, and I have to say that it seemed like a really nice group of moviegoers. Even for Colorado, people were a lot friendlier than I’m used to.

Inside the theater, we still had some commercials to get through, but I was glad, because it gave me time to enjoy the buzz of excitement throughout the theater. When the lights finally dimmed, people started clapping and cheering and SPOILER ALERT! That clapping and cheering lasted, albeit intermittently (straight through would have been creepy), throughout the end credits.

But in the meantime, we got to watch cast members and Rob Thomas interviewed as they arrived in New York for the movie premiere. It was a special bonus for the fans as part of the AMC experience, and it was incredibly fun. Granted, I was jealous of my home state for having the whole VM gang there, but sitting in the front row as an entire theater hooted and hollered when each familiar face graced the screen was so awesome. Ryan Hansen is apparently just as funny without a script, and had the audience LOLing pretty hard. While the audience was clearly excited to see everyone and you had the expected cheer competition from the Piz versus Logan ‘shippers, Francis Capra got the loudest reaction.

So then we were all warmed up and everyone freaked out as the movie started! But then got very quiet, which was AWESOME. No one was talking or texting; it was like sitting in a really big living room with other people who just wanted to watch their show.

Which is certainly not to say that the audience was silent! Each time another character would return, everyone expressed his and her appreciation through clapping and woo-ing. Every joke was met with appreciative laughter, especially the inside ones, of which there were many. At one point, there was a reference to “Buffy” that got the loudest audience reaction of all!

However, I really liked that while it was a total experience for the fans, the “Veronica Mars” movie stood on its own as an interesting movie that you didn’t have to know the show to enjoy. On top of that, the movie really didn’t spoil the mysteries of the show, so if someone goes to see the movie and then wants to watch the series, there will still be a lot of excellent surprises.

Having marathoned all but five episodes in the series this past month with my boyfriend who’d never seen the show, it was a pretty emotional experience. I watched these people that I’ve spent so many hours recently suddenly get 10 years older, even though the cast has barely aged, looks-wise. But as is befitting of a movie based around a high school reunion, we see that a lot of that adulthood — the confidence, the maturity, the having it all figured out — is just a surface to scratch.

In the pre-movie interview, Ryan Hansen mentioned the possibility of a sequel, and man do I hope so. Rob Thomas showed with this movie that his ability to weave carefully crafted mysteries together like nobody’s business remains strong, and he still has the perfect cast to bring them to life — plus a few new fun additions that I won’t spoil.

I didn’t want the movie to end, but was impressed that they kept it as short as they did. This was a movie created for fans of a television show, and I thought that “Veronica Mars” did a great job at being a standalone movie, while not trying to ever stray too far from the Neptune we in the audience came to experience.

Thank you to everyone who made and backed the “Veronica Mars” movie. Thank you Anne for getting us the tickets, and to everyone in the theater for a night like I’ve never experienced, likely never will again, and definitely will never, ever forget.