Posted on September 27, 2012 by judisunshine

In my as per usz timely fashion, I want to finish the blog I wrote a year ago! You see the other current show I (was/am) watching, that has my heart the most, is one that I recently caught up on thanks to good old Hulu Plus. And I am so, so grateful that this show got renewed for not only a second season, but a third, and a fourth! It sort of had a “Party of Five” situation, if Po5 had never taken off with the fame. “Parenthood” and its viewers never know if it’s going to get renewed, but it keeps on trucking, held up by its fiercely loyal fans. Despite my lack of cable, I am one of them. So with no further adieu, I now present: 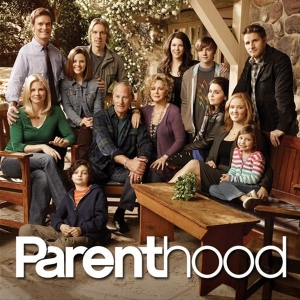 “Laughter through tears is my favorite emotion,” Truvy says in “Steel Magnolias.” Mine too. Omg, “Parenthood” can be so MOROSE! But the show is very self aware, and seems to relish in messing with the audience’s emotions – making them sob until a surprise LOL! This show is so great at the sad, but it’s also so witty. And I love that while this show has certain actors that are known for being funny, everyone gets to be funny on this show, including the kids.

And no matter how bad my mood, no matter how lonely I feel (my boyfriend and I often have conflicting schedules, and I get sad), I know one thing for fact: If I can muster up the energy to go to Hulu Plus and put on “Parenthood,” I will feel better within 44 minutes, wracking sobs notwithstanding. This show is so COZY. No matter how often people fight and get butthurt, almost every ep ends with the Braverman family doing something awesome, often with white Christmas lights surrounding them!

I love casts. They make or break entertainment for me. And there is no word for “Parenthood’s” casting job, besides exquisite.

All the kids are great. I thought that Max Burkholder was awesome since that one “O.C.” ep, and he really brings it on this show, as a kid with Aspergers. I think Burkholder’s in Hollywood to stay. Savannah Paige Rae as Sydney reminds me of myself at that age, to an eerie extent, including the vegetarian aspect, and the precociousness that she plays with a relish. Tyree Brown is awesome, just wanting everyone to be happy, and figure out his own life aside from all the grown ups’ drama.

The teens are superb. Sarah Ramos is WAY underrated, IMO. Playing a teenager, while you are still young, with tons of perspective and irony? No easy feat! I always like Hattie scenes; Ramos is one of THE most realistic teenage actors I’ve witnessed. And whoa, according to IMDB, she was born 9 days after my baby brother Eric!

Mae Whitman and Miles Heizer are a dynamic duo, to be sure. I’ve been a Mae fan since “When a Man Loves a Woman,” because I used to be a child actor, and knew this kid had a major future. Miles is subtle, and wonderful, and I wish that every teenage girl had a Drew in her life.

I’ve written odes to the awesomeness that is Craig T. Nelson. Erika Christensen’s Julia is probably my favorite character, if I had to choose. Possibly because she bears an eerie resemblance to my sister-in-law. But this show (fittingly) follows the principle of Perks of Being a Wallflower, in that each character is my favorite, if that character is in the scene. Bonnie Bedelia is glorious; Monica Potter I honestly never *got* until this show, a la Emily VanCamp, and once again I must check myself, after I’ve wrecked myself, because Monica Potter is superb, and makes me cry almost every episode.

Dax Shepard is great, and as good at the serious as he is at the funny. He’s another one of my favorites on the show. Peter Krause is a proven rock star, so gifted, and I really like getting to see him play the David to Dax’s Nate, as far as these things go. Sam Jaeger is wonderfully subtle; I always like actors who are good at acting even when they don’t have lines. When he does speak up, it’s always badass. And while I didn’t know if Jasmine could make my Crosby happy, she won me over and then some, and Joy Bryant’s acting has always been spot-on. She had me sobbing my eyes out at the end of “Remember Me, I’m the One Who Loves You.”

Plus! Great guest actors. I was aways an Aidan girl, and am thrilled to see John Corbett again; he’s fantastic, as is Jason Ritter! Not to mention that Ms. Christine Hill shows up to play a stringed instrument and canoodle with Crosby! And I miss Minka Kelly as Gabby.

It’s hard for me to tell, which show’s series finale broke my heart more, “Buffy” or “Gilmore Girls.” “Buffy” is (obvi) my obsession in a way that other shows can’t touch. But the thing about GG, is that not only does it give “Buffy” a run for my favorite-show money, it lasted for years after I had to say goodbye to the favorite shows of my quasi-youth. GG trucked on for half a decade after “Buffy” and “Felicity” and “Party of Five” all departed. So it hit extra hard to lose my beloved “Gilmore Girls.”

To see Lauren Graham not only in another cozy show, but in a role that she brings her unfailingly multi-dimensional acting to, is a dream come true, for me. Not to mention that I really relate to Sarah, as when the show started, she was in her late ‘30s and having to move back in with her parents, due to various life fail. But she always keeps her heart soft, and she’s a writer. Okay, maybe she’s my favorite character – I can never tell, on this show! But I am admittedly prejudiced, as Lauren Graham is one of my favorite women in Hollywood, ever, if not my very favorite. The woman is spectacular, and I love that she’s friends IRL with Mae Whitman.

I need to make one thing clear: I am not cool. I mean, I’m okay and cool in ways, but I’m not one of those kids who grew up knowing not to be worried about society; we’ve got this, ‘cause of our awesome record/tape/CD/MP3 collection. I beg, borrow, and steal my music from people I trust, and stick with what I like always, but open my mind to those wiser than me. “Buffy” and the Rolstons get big credit for exposing me not only to music, but the culture of music lovers. Though to be fair, I do have a 1989 Beatlefest under my belt!

Recently, I posted a video on my Facebook of one of the songs used on “Parenthood”: Donovan’s “Catch the Wind.” Someone from aforementioned family of music lovers commented about it, and it was just like: You go, “Parenthood.” Way to choose the awesomest stuff. Because when they used “Catch the Wind,” omg. I hadn’t cried in hours, but that song and accompanying montage broke my heart into a billion pieces. And I didn’t know “Catch the Wind,” before that, despite my mom’s Donovan’s Christian album where he put away his idols.

Plus, from “Remember Me, I Used to Love You,” and speaking of “Six Feet Under,” Deathcab’s “Transatlanticism” played in one of Julia’s most heartbreaking moments in the show.

The music that we love is like, the score of our lives. And few shows do it, for me personally, as well as “Parenthood.” The people in charge of it take music as a life form itself, handle it ever so delicately, then place it back into the episodes. Though it spans many decades, it all sounds current, timeless…meaningful, to the character on the television, to us in the audience. It is sublime. Though to my knowledge, this show has never used Sublime.

I’ve grown up with people all around me talking about how television’s ceased to be “family friendly.” I continue to grow up, decades later, with people who say that not only is television not family friendly, but that “There’s nothing good on TV anymore.” We will DISCUSS the latter concept on a different day, but for now, focus on the former.

This show doesn’t have Very Special Episodes where we realize that drugs are bad, sex is wrong, and the world is black and white. Those are so many “family-friendly” shows and movies that I’ve seen over the years, and while they can be awesome in an ICMN way, even at the height of my Christian fundamentalism, I realized that they were a bunch of (albeit entertaining) horse hooey.

But anyway, in “Parenthood,” we get a lot of the gray. Drugs = hilarious in the hands of Peter Krause, holding a pot lollipop. Drugs = terrifying, in the hands of John Corbett’s Seth, because he’s an addict who lost his family because of it. Drugs = come on, focus on school, but I won’t blow a gasket if you smoke weed sometimes if you don’t ruin your life, in the hands of the show’s teenagers.

Gray. And the gray is glorious. Because when you can see gray, you can see that your own crap sometimes stinks (Edited! For Families!). And on “Parenthood,” every. Single. Character has that moment of humility. Some characters have more moments than others, but every character has at least one or two or ten. And if anyone can show me a family more family-esque than the Bravermans? I’m listening.

If you cross paths with my pop cultural tastes and haven’t watched “Parenthood?” Watch it. Go, now, go!