Posted on September 6, 2012 by judisunshine

For my birthday, I received the gift I’d been wanting the most for so long, but couldn’t justify purchasing, given my financial situation: The entire series collection of “Buffy the Vampire Slayer.” 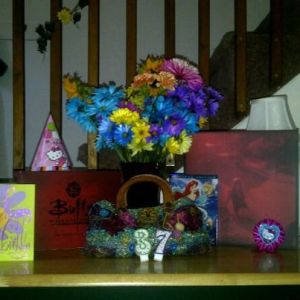 Because now, within my eyesight, I have every single episode of the show I dorked out to most. I want to write a fabulous, deep, insightful blog about what this show meant to me, and continues to mean to me. I thought about writing a “5 Reasons to Watch ‘Buffy the Vampire Slayer’” blog. And maybe I’ll do both of those in the future.

But today, I really just want to send the world, Josh my boyfriend, and Joss the creator, a heartfelt thank you.

I ride a fine line between endearing and insane, and “Buffy” brings both out of me, in equal parts. See, back in the day when I used to watch “Buffy” in real time, I was going through my early 20s. Catastrophe and romantic dismay abounded at every turn.

During said time, I spent a Valentine’s Day by myself, upstairs in the third-floor bedroom of my parents’ house. Despite my loathing of errands and/or driving to pretty much anything, I’d made the trek to Roosevelt Field. There, I purchased the best thing ever: Season Two Buffy VHS tapes.

You see, this was way before TV on DVD. But “Buffy” has always been ahead of its time, and would put out “best of” tapes. In the case of Season Two, it was the (SPOILER!!!) Angelus eps, the ones that got me into the show in the first place. (Stab my eye, Joss Whedon, for I have failed you, and did not get into your show until 1998. AND YET! I am referencing Season One!)

So on a night that I should have ostensibly been lonely and depressed (more than usz), I went home with the best mall treasures ever!: “Buffy” tapes and food court sushi.

I felt so much joy back then, even through the midst of my angst, just to have “Buffy” eps, all put together in an awesome package, complete with commentary and other assorted awesomeness.

And throughout a part of my 20s, that’s what kept me afloat. There was a point where I felt like, wait, have I reverted back to five years old, when I had an imaginary friend?

Because Buffy and everyone (especially Willow) felt like friends. Any time I was sad, any time I was lonely – I could put in a tape, and there they would be. Clever, strong people who saved the world on a daily basis, dwarfing my woe.

“That was then. This is now.” That’s a line from my favorite (if I HAVE to pick just one) “Buffy” ep of all time, “Innocence.” And it remains relevant to my life!

I woke up on my 37th birthday full of 20s angst. Life was changing; life was leaving, and one day I will die. This is how I roll, mentally.

And, as if possessed, I walked towards the bookcase in my living room that holds the DVDs. Because I needed to watch “Surprise.” Because it was my birthday! Just like Buffy!

And…something more. I am not sure what.

Murphy’s Law reared its dreary head, as the one disc that held “Surprise?” Surprise! No birthday “Buffy” ep for you. Not sure at all what happened to that disc, but its missingness is actually a testament to its awesomeness, because that means it’s one I’ve watched a lot.

I’d had NO idea that Josh bought me the “Buffy” series collection. But he did.

And we watched “Surprise.” AND “Innocence.” Happy birthday to ME. Because we also finished out Season Two.

What you need to understand, is that how some people feel about “Star Trek?” Or “Star Wars?” (I would have slashed it into one simple line, but I’ve seen “Fanboys.” (How much does Kristen Bell rule the planet?)) How some people feel about the Broncos or the Yankees? That is what “Buffy” is to me. This show is the foundation, for better or for worse, of my Internet addiction. Because I’m jacked in 😉

“Buffy” tears (in a good way) at my heart, my soul, my mind, my creativity. It fuels me; I’m neither gonna lie nor front.

Thing is, though? It hasn’t, for a long time. Not since my aforementioned 20s. It haunted me; it stayed with me, but although I’ve seen my favorite eps a billion times, and even my least fave a handful, I have never rewatched this glorious series, beginning to end.

For the first time in a long time, I was waiting. I owned battered (and bewildered?) seasons on DVDS, since they started making them. But “Buffy” didn’t deserve Netflix filling in the gaps. “Buffy” deserved to be within eyesight.

Thank you, Josh, for my birthday present.

Thank you, Joss, for my birthday present.

1 Response to Thank You Josh & Joss (A Buffy Blog)