Posted on September 21, 2011 by judisunshine

I’m an emotional person. I feel things and I need to be able to get upset and talk about how I’m feeling. I mean, that’s just…that’s who I am and I can’t change it.

So, the verdict is in: I am morbid. This is something I never realized. But I guess it’s true. Once, I turned a happy exchange about boats with a sweet retired veteran into a story about my friend who got a brain disease. The night after watching the “Grey’s Anatomy” episode where the woman all of a sudden dies from internal bleeding, I accidentally hit myself in the stomach really hard with the corner of a big plastic tray at work, and spent the rest of the night worried that I was going to drop dead in the Boulder Creek parking lot, all alone in my boxy, dirty uniform.

I know that if I were the only one who got like this, there wouldn’t be shows about forensics and death to begin with. But, I do think that in many ways, I take life really hard. Somewhere along the line, my self-preserving instincts kicked in and gave me some remarkably awesome gallows humor that has helped me to never have to say, “Too soon” about a joke. In fact, jokes that are “too soon” are usually my favorite, because I find it unendingly fascinating, the resiliency of the human spirit.

And yet, despite the jokes, stuff gets to me. Disappointment, stress, loss, rejection — things that by my age, I really thought would hurt less. But, no, it hurts the same. I cry a LOT. I can’t write people off when I probably should. And little leaves my memory, so basically my brain is like the Wheel of Fortune at all times, spinning around, and could conceivably land on any given memory or emotion that’s taking up space inside of me.

I know I am blessed, and compared to many people’s lives, I have it crazy easy. But when I look at the people around me, I sometimes feel excruciatingly behind. Like life is passing me by at a rapid pace, and I’m never going to have anything important of my own that’s going to stick. Losing a husband and three homes in two years, I think, had a bit to do with that. But because of my perma-soft heart, I can’t say screw it all. It’s just not me, and if there was a doubt in my mind that I was exaggerating anything thus far, it was immediately erased when I just typed “perma-soft,” and all of a sudden remembered that hair product line from 1987, and whooshed back in time to when I was 12, in my Merrick shower, feeling all cool because I had my special perm shampoo in the purple bottle (lavender for the conditioner).

Yeah. Things don’t leave me. Words, scents, sounds — and all the people and places that are attached to them — stick around. A lot of times, that’s a heavy burden. I can’t think of a single Sunday at Boulder Creek that I haven’t choked up for at least a second, because a lot of families come in with grandparents. And I miss my grandmother who died three years ago, and my grandfather who died in 1991. I wish they were still here. And I’ve “healed” from losing them, but in those moments that I see people out to eat with their grandchildren, I miss the grandparents I’ve lost as profoundly as though they left yesterday.

But every now and then there are these moments. The other day I drove home for lunch, all downtrodden about something or another. Life in general. I’m not sure. But I was feeling sad, as is my wont.

And then — then I looked up at the street on which I was driving. My new street. And the trees that lined it were meeting in the middle, forming a perfect archway of the most amazing colors. You know how it seems like autumn has become one of those “blink and you’ll miss it” seasons? Which is so sad, because it’s my absolute favorite season of all time, and I feel like I haven’t really seen fall foliage in forever.

And when I tell you that every time I have to turn around just to park in front of my apartment, I get really annoyed — it’s sad, but true. I hate that my street is so narrow. I hate that the times when I am AT home are so few and far between.

But in that moment, I realized that if my street weren’t so narrow, the trees wouldn’t be meeting in the middle like that, and it may sound silly, but I’ve always wanted to live on a street where on a fall day, the tops of trees would touch. I’ve seen it in the movies and it always looks safe. Comforting. Incredibly temporary.

And I realized that if the times that I were home weren’t so few and far between, that I might never have taken the time to notice this moment. Witnessing such beauty as I drove home made me realize that while it can be really tough, feeling everything so much, never having the concept of death far from my mind at any given time — that’s all just one side to the equation. On the other side lies a remarkable gift. The privilege to have Our Town-y moments while I’m still here on Earth to appreciate them. My brain may move at a mile a minute, and I can be very “dark and twisty.” But I will take that. I will take a hard life, a propensity for morbidity, an unexpected flash flood of Sunday afternoon grandparent tears. If it means that at the age of 31, one of the most invigorating moments of my year comes from something as simple as looking at trees? I’ll take it all. 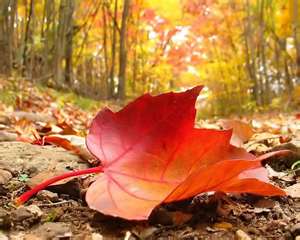