Posted on August 8, 2011 by judisunshine 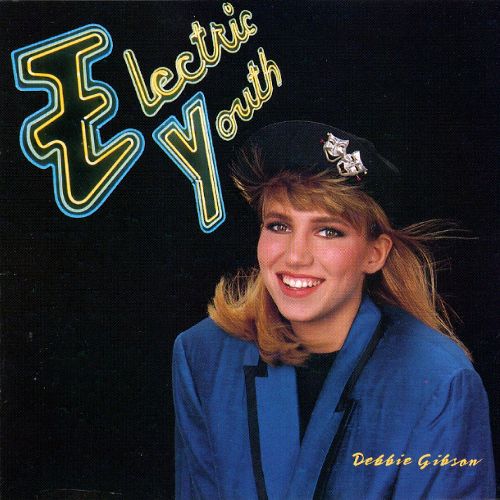 “Electric Youth” was Debbie Gibson’s second album. And see, I get that Debbie Gibson might be considered cheesy by some, but I feel that despite her career longevity, her ’80s self is underrated. She wrote all her songs, played guitar and piano, AND produced this entire album from her garage! And let us not forget the AMAZING Electric Youth perfume — bright pink with an “electric” coil running through the middle! So let’s review!

Synopsis: I totally have your back.

THEN: The chorus kind of got on my nerves, but I still liked it. Plus, the first time I heard it, I was so excited that the new album was out, that it felt full of promise.

NOW: I got the old excitement when this started! Awesome. And you can tell right off the bat that she had come a long way from her first album.

2. Lost In Your Eyes

Synopsis: All that matters is that I’m so in love with you right now.

THEN: Pure, unadulterated love for this song. Please see: everything I’ve ever said about ’80s ballads, but multiply it by A MILLION, because this is one of the most gorgeous songs EVER. I loved it so much that the first karaoke I ever did, I sang this song. And it went terribly. There is video evidence. You’re not gonna see it. But I will tell you that I was wearing a baja and leggings, and had a perm.

NOW: Oh wow! I had no idea this came so soon on the album! Guys, this song is just great, plain and simple. One of the best love ballads ever. It’s beautiful, it’s simple, it just is awesome. And, I’ve discovered from karaoke that this song has a huge fan base with guys! That means that so many were liking it back in the day and not admitting it. Which is awesome.

Synopsis: We’re not together, but we’re still in love, and just act like we hate each other.

THEN: I don’t really remember much about this song except not liking it, especially coming right after “Lost in Your Eyes,” it was a big letdown.

NOW: Wow, there’s some electric guitar action going on here! This isn’t bad so far…was I wrong to not like it back in the day? Well, it’s okay. Not great, not bad. I don’t have much to say about it, so I will take this opportunity to say that I really love bridges. I miss them. Back in the ’80s, everything had a bridge! Are they considered uncool now? If so, why? What is uncool about a bridge? Bring back the bridge!

Synopsis: I miss you, and am gonna tell you like a hundred billion times.

THEN: I think that I hated this song for a long time, then one day it just SPOKE to me ’cause I was all in love with “Herbie,” and he “hated (me).” True story!

NOW: This song is not my fave, but there’s actually some really interesting stuff going on, and I admire her creativity. There’s like, a bridge in the middle of the song! Then another bridge later on! Uh oh, but here comes the “Melrose Place”-y saxophone thing. Why did every song in the ’80s have that?

Synopsis: Dude, stop being a douchey coward just so I’LL break up with you and you don’t have to get your hands dirty. (Part of that might be my own stuff (TM Willow Rosenberg).)

THEN: Ohhhhhhhhhhhh. This was AWESOME, because it had a FLUTE. I was so excited about this. And I loved the song. I remember Krysi had the album before I did, because her parents loved her more than mine did, and she came into school all “OMG! Best song ever!” and wrote out all the lyrics to this, and I was all, “So deep.”

NOW: This is a really pretty song. And sad. Silence really DOES speak a thousand words.

6. Should’ve Been The One

Synopsis: It should’ve been you, with me.

THEN: THIS song has a lot of relevance to my past. First of all, it was another one of my songs for Herbie. Second, and most importantly, Krysi and I realized that this one part totally went with one of our cheers, and we would always do it, along with Shannon. “Here we go!” Debbie cried beforehand, and here we DID go.

NOW: Yay! This song is fun. And um, Shannon and I still do the cheer. Yes, we have hung around in the aughts, listening to Debbie Gibson, and cheering.

Synopsis: Debbie believes the children are our future.

THEN: Hahaha oh man. This song…classic. And I will tell you a secret now. I set out to learn the entire dance from this video. Because it RULED. That didn’t end up happening, but I could do the whole beginning part. Maybe it’s not too late to learn the rest! This video was so, so awesome. Crazy, synchronized dancing! Wooooooooo!!!

NOW: YAYYYYYYYYYYYYYY! What can I say to possibly do justice to this? I can’t! So just imagine all the energy in the world in song form.

Synopsis: We’ve never had any real problems, or had to lose each other, so what happens if our complacency ultimately drives us apart?

THEN: I loved this song. So pretty. Plus! The video was in black and white! AND featured Danica Mckellar, AKA Winnie Cooper, playing…I think a cello? Some stringed instrument? Although, awesome as that is in and of itself, the video really didn’t make a whole lot of sense, to be completely honest.

NOW: Another song that I just can’t not still think is beautiful. And it’s actually pretty deep, and you don’t really hear songs about this kind of thing, which is cool.

Synopsis: Once we get over this wall, we’ll be all set.

THEN: I did not care for this song.

10. We Could Be Together

Synopsis: I’m with this guy, who’s pretty safe and nice and all, but I LOVE you, and if you just say the word, I’m all yours.

THEN: Wow, I loved this song! And, I know this is going to shock you, but wait for it — it reminded me of a boy! I loved the lyrics.

NOW: It’s still decent, but hasn’t aged great, especially now that I know the acoustic version, which we’ll get into later. BUT, it still has two bridges, and y’all know how I feel about bridges!

Synopsis: Okay, enough pussyfooting around, are we together, or what!

THEN: I remember being at strong odds with Krysi (Debbie’s other number one fan) about this song. She LOVED it, and I…did not.

NOW: I actually like the song more now than some of the others. Still don’t love it, though.

11. We Could Be Together (Campfire Acoustic Mix)

Synopsis: Same as the original, but acoustic!

THEN: Okay, see, I originally just had the tape of “Electric Youth,” and this was only on the CD, which I got later. BONUS! And I liked this version better. PLUS, I was learning how to play it on guitar!

NOW: Same, but I could do without all the echoey stuff going on. But like I said, it pretty much ruined the original version for me.

THEN: I remember thinking this was a pretty redundant version. It is not an acoustic mix! All it is, is missing the stringed instruments! That’s not the same!

NOW: Its still such a beautiful song though <333 And although it’s not acoustic, I think I might like this version better now! Wow, scratch that. I definitely like it better! Nice.